Col Howarth is a 40-year old Mancunian living in Wales: a stranger in a strange land. Indeed the land of his father-in-law. He is also a stand-up comedian, one-time media and film lecturer (he definitely did it more than once – that’s just a figure of speech) and a father of two whose one eye looks wistfully at a rose-tinted past whilst the other stares with dread into a future that may inevitably involve piles. As a stand-up comedian he once supported a psychic – which didn’t help. 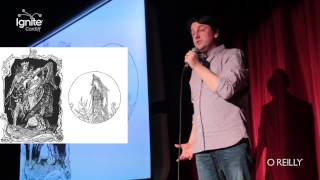