I like riding bikes; I don’t take it too seriously but it’s what I do most days to get around and I like the odd challenge. Last year’s included; mountain biking through rivers in mid Wales and leading a ride to London so that a friend could pick up her MBE. I warned my kids that I’d replace them with bikes when they left home, given the delay in them doing so I’ve tried to crowd them out but it’s not worked yet!

I worked in the Third Sector for over 30 years but decided last year that I’d like to work for myself. One of the key motivators was that I’d be able to ride my bike more and get other people to ride theirs and so far so good!

In my spare time I do much of the same, I’m a trustee for CTC the national cycling charity, lead rides for Cardiff CTC and am involved in Cardiff Cycle City – Cardiff is going to be the best cycling city in the UK! We’re about to launch Cardiff’s Cycling Manifesto which has been created with input from around 1,000 people! 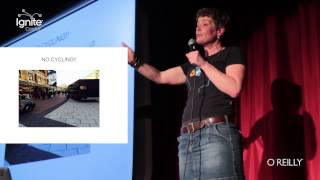 I hate the Taff Trail!