Always wanted to be a journalist when I was younger. Got to interview cool people like Moby, Anna Friel and DJ Shadow. Offended Paul Oakenfold by suggesting he was going commercial. Hardest interview was Tricky (Too stoned. Him not me). Funniest interview was Mark Lamarr. Had to pause interview as I was laughing so much and I couldn’t remember any of my questions.

Soon came to realize I couldn’t spell. (Before the days of spell cheque). So looked for other opportunities.

Turned down appearing on Richard and Judy. Twice.

Scraped a BSc in Computer Science. Purely for amusement – once turned up to one of my exams in swimwear, towel and goggles (after checking the exam rules about whether swimwear was ok. No mention). Note: goggles tend to steam up in a room full of people, making reading exam questions quite tricky.

Moved into music production. (Dad was once a DJ, Mum was classically trained)

Lots of planes. Lots of parties. Lots of unrepeatable stories. Got lucky, made a few singles and got to DJ around the world for about 15 years. Was big in Spain. Rocked Australia. Confused Japan by mixing on one deck and eating from a rotating bento box on the other deck.

Did an anonymous music single with a famous politician as result of a bet. Aardman Animations did the video. I did TV interviews with my face disguised. He’s even more famous now. We don’t talk about it.

Moved into the film and video world. Worked for the BBC in London. Accidentally hugged Bruce Forsyth (on my 1st day). Kicked Richard Hammond in a lift. Blagged into lots of wrap parties. (Going up the fire escape ladder at Television Centre was one of my techniques. Pointing to my watch strap and walking past security when I didn’t have a vip wristband was another.)

While at BBC got down to final 4 in a DJ competition to become resident at Space, Ibiza. Didn’t get selected. Got to DJ at Space though. (Danny Tenaglia’s night if that means anything)

Left BBC after reaching mini goal of filming Armando Iannucci and working with Dave Gorman. Both lovely. Armando was clearing out office so gave me The Mighty Boosh book. Dave gave me nothing.

Now running Callapro Films in Cardiff, working worldwide. Instead of trying to move people on a dancefloor – now try and move people emotionally through film. Occasionally get to film things like adventurers on volcanoes, bands on top of igloos in Lapland and interviews with Richard Branson in his family home.

Won a music video competition for Norwegian band Rokysopp by persuading next door neighbour to ride around the back streets of Cardiff on a Raleigh Chopper dressed up as a cowboy. Also got him to ‘duel’ with randoms with a children’s plastic toy gun in Cardiff Bay. We were moved on. He’s since left Cardiff. (Not sure if its related)

Turned down a job to work in LA working as a personal videographer for a millionaire entrepreneur. Chose to put my family first. Bit sad. Cheered up by the fact it rains a lot in LA.

Now on a big magical adventure to do a load of Good Deeds through We Make Good Happen, help make the world a better place (even in a small way) and have a positive impact on people.

About to launch We Make Success Happen – enabling others to step up and achieve their potential.

Biggest achievement for me is being a proud dad (to a 1 year old) and step-dad (to a 16 year old).

Not really – it’s DJing to thousands of people going ballistic in a stadium to our music. 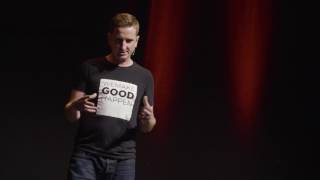